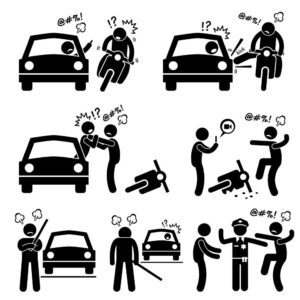 May 12, 2012, started not very different to any other day. However, by the middle of the day Akash could not say that it was normal. The day went south while Akash was driving his wife back from an interview.

A drive is usually hectic on the traffic filled roads of Bangalore.  Being a daily chore from past few years the chaos of Bangalore roads had become the part of Akash’s life.  The utter disregard of traffic rules, The Autowale, The taxi drivers, the bikers and even the personal car owners with a mindset that their comfort comes first was a daily site.  Much did Akash know that one of these sites will take him to police station today.

Akash was driving calmly and carefully to make sure that he does not end up hitting some lord of road. That’s when a scooter crossed him from the wrong side while he was taking a tight right turn with an open drain and a wall on the right. It was a lucky day for the scooter and its riders. They missed the car and the drain. Akash could not say the same for him.  The riders got very angry and started ranting on Akash. This made him very upset, why he should hear ranting’s from some goons who don’t even seem to care for their own lives. Akash decided to give them scare by revving the engine and slowly driving towards and then away from them. This did not scare them a bit, and they started ranting even more. To try his luck again to scare them away, he drove a bit in reverse and then decided to leave them alone. The goons believing that they are made of stronger metal than the car’s body did not want to leave them alone and started following them. At a busy junction, they overtook them and stopped their scooter in front and started banging their hands on the car. Akash was not scared of this as he knew they couldn’t breach the car’s body. Akash was thinking how could someone on road can be so daring after making a mistake (probably they did not even know that they over took incorrectly and could have got severely hurt. An irony of our nation). This time he decided to slightly touch them to move them out of the way and drove to the nearest police station.

Police station is a place where the scene gets more ironic. The two guys started threatening Akash and his wife in front of the inspector. The Police inspector listened to ordeals then told Akash to wait while traffic police is being called. Everybody in India knows how helpful our police is. The traffic police thing was just an excuse to keep us waiting to lead to a compromise. I would not blame our police for their behavior. It is a tough business to manage an ill financed and ill managed service in a place like India. Akash and his wife kept waiting in the police station for more than two hours with no progress. While the two goons were waiting outside the police station with a few of their friends. Being a part of corrupt and opportunistic society. Akash know he will not get help from police, and he is outnumbered against the goons. Collecting crowd was the way to go for him. The ordeal ended with a mutual compromise and dent in Akash’s pocket.

Losing money and peace of mind are not the real concern here. If you are one of those who says that being quiet could have saved some money. Let me try to draw your attention to some very serious consequences

What if the riders of the scooter were not lucky? They were not even wearing a helmet. Just imagine if they would have hit the wall or the car. They could have got seriously hurt. From my personal experience when a bike get involved in a serious accident with a bigger vehicle. He is the only loser. He might get the refunds for the monetary expenses, but money can’t heal pain caused by broken bones. It can’t bring back the dead.

Respect the rules and know your limits. An accident of a biker with a bigger vehicle will bring a lot of inconvenience and monetary loss for the owner of bigger vehicle but for a biker it might be his last day.

Where helmet and follow the speed limits. Try to be sensible on road. Some day you might meet and accident that brings a lot of money to your family but take you away.

Choice is yours; Life is yours.